Blade is developing innovative approaches to understand the underlying disease and treat fibrosis.

Uncontrolled, progressive fibrosis is a driving factor in organ dysfunction of many debilitating disease states, afflicting millions of individuals in the United States and worldwide. Fibrosis-related diseases can affect organs including the liver, lung, skin, kidney and eye, leading to organ dysfunction and failure, and potentially death.

While the underlying pathophysiology of fibrosis is complex, research continues to enhance our understanding of the disease processes. Some common components of the pathophysiology of fibrotic diseases are known, as represented below. Activation/differentiation of myofibroblast cells is recognized as a central step leading to the production of extra cellular matrix (ECM).  The replacement of normal cellular-tissue architecture by progressive deposition of ECM (fibrosis) by myofibroblasts leads to organ dysfunction. Expression of alpha-smooth muscle actin (aSMA) and Collagen 1A1 (Col 1) are early markers of myofibroblast cell activity. There is a pressing need to identify targets and develop new therapies against those novel targets and pathways that can arrest and reverse this process. 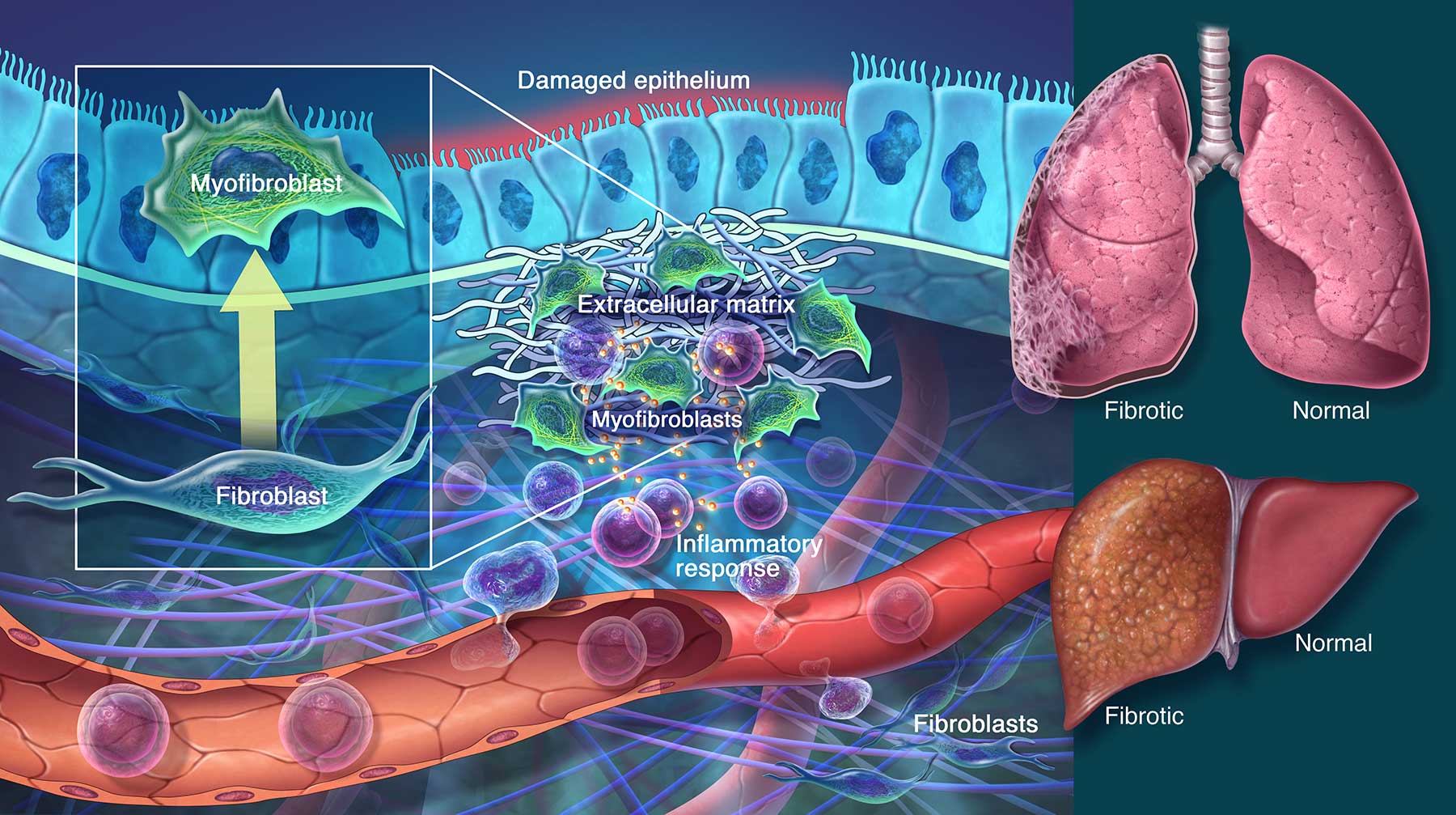 Blade’s lead program, BLD-2660, was developed by leveraging insights from John Hopkins University School of Medicine (Laboratory of Hal Dietz, M.D.) to discover new therapeutic approaches that can broadly modulate fibrosis, and thereby contribute to the treatment of diverse diseases.

BLD-2660  is specifically designed to target a group of neutral proteases, the so-called dimeric calpains (calpain 1, 2 and 9), which are part of larger family of calpain proteases, of which there are ~15 members. In  pre-clinical models, inhibiting the activity of dimeric calpains has been shown to be beneficial to stop progression or reverse fibrosis in several organs and acts at the early stages of myofibroblast activation/differentiation. Data generated by Blade and others demonstrate that inhibition of the dimeric calpains has a direct anti-fibrotic effect in multiple organ systems.

Autotaxin is a secreted enzyme that catalyzes the hydrolysis of lysophosphatidylcholine (LPC) into lysophosphatidic acid (LPA), a bioactive phospholipid.  LPA action is exerted through its binding to specific G-protein-coupled receptors, LPA1-6, resulting in the initiation of multiple signaling cascades, such as calcium mobilization, activation of Ras, and extracellular-signal-regulated kinase (ERK) pathways. The activation of these pathways has an effect on cell survival, cytoskeletal remodeling, as well as migration, and endothelial permeability. LPA receptors are differentially expressed in different tissues and cell types.

LPA/ATX axis has been linked to the pathogenesis of fibrosis in several organs. Decrease LPA activity has been shown to be beneficial in models of liver, kidney, lung and skin fibrosis. Additionally, increased levels of ATX and LPA have been measured in chronic diseases including IPF, fibrotic liver disease, and rheumatoid arthritis. In clinical studies, inhibition of ATX or LPA1 has shown promise in slowing disease progression in IPF patients.

Idiopathic pulmonary fibrosis (IPF) is a rare, highly debilitating, and poorly understood disease. Most commonly affecting individuals over 50 years old, IPF is characterized by interstitial pneumonia and chronic progressive lung fibrosis. Over the course of the disease, healthy lung tissue is replaced with fibrotic tissue, causing a continuous decline in lung function. Disease progression is unpredictable and is often rapid, with many patients progressing to lung failure and potentially death within 2 - 3 years. Unfortunately, the disease’s early genesis is unknown, and there are no tests to identify patients that are at greatest risk of developing IPF. Members of Blade’s own team were instrumental in the pioneering work at InterMune that led to the approval of pirfenidone to treat IPF; however, there remains a pressing need for effective therapies for this serious and as-of-yet incurable disease.

It is estimated that up to one-third of the populations in the US and Europe have a condition termed non-alcoholic fatty liver disease (NAFLD), which is characterized by steatosis, or excessive accumulation of fat in the liver (Wree, 2013; Blachier, 2013). Many of these individuals, for reasons not totally understood, subsequently develop liver inflammation, or steatohepatitis. This condition, called non-alcoholic steatohepatitis, or NASH, develops in roughly 10 - 20% of NAFLD patients, accounting for approximately 10 - 20 million individuals in the US (Schattenburg, 2011). Individuals experiencing chronic liver inflammation often develop liver fibrosis, with eventual risks of cirrhosis, hepatocellular carcinoma, and liver failure. Based on current projections, NASH is predicted to become the leading cause of liver transplantation by 2020 (Wree, 2013). Unfortunately, there are no therapies available to prevent or treat liver fibrosis.

Systemic Sclerosis (SSc) – ILD Systemic sclerosis (SSc) is a rare and chronic condition characterized by organ fibrosis (including hardening of the skin) and vasculopathy. Fibrosis affects multiple organ systems including skin, lungs, kidneys, GI, and heart. Interstitial lung disease (ILD) and pulmonary arterial hypertension (PAH) are severe manifestations of SSc and when present, increase mortality significantly. ILD in SSc is often associated with a decline in lung function within the first several years of lung disease onset. Clinical symptoms of SSc-ILD can be variable. Patients with mild ILD can be asymptomatic in the early stages of their disease and may not be diagnosed until lung decline is considerable. Administration of treatment early in the course of SSc-ILD may lead to improved lung function. Thus, screening and initiation of treatment with an anti fibrotic at an early stage in the disease process is highly desirable.

Poly Q diseases are a family of currently incurable and mostly autosomal dominant neurodegenerative diseases. They result from mutations causing expansion of trinucleotide (CAG) repeat region of genes. In the case of Huntington’s Disease, the mistake is in the huntingtin (HTT) IT15 gene. In mutant Htt, the polyglutamine tract encoded by this region contains over 35 glutamines and encodes an abnormal HTT protein. These mutant proteins are burdened by toxic gain-of-function and aggregation properties.

Calpains are known to inhibit autophagy by clearing key proteins. Strategies that reduce calpain activity in vitro have been demonstrated to increase autophagy and decrease levels of autophagy substrates, like mutant Htt. The Blade strategy is to inhibit calpain activity to harness the cell’s capacity to degrade mutant aggregate-prone proteins via autophagy. Mutant polyglutamine expanded proteins (including mutant HTT, tau, and mutant ataxin 3) are autophagy substrates. In animal models, clearance by enhanced autophagy has been shown to reduce toxicity.